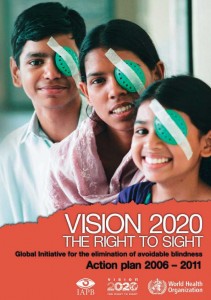 Eye-care services must be comprehensive, encompassing eye-health promotion, prevention, treatment and rehabilitation. The full range of these services must be integrated into health-care systems and delivered to the population in a stepwise manner. In order for VISION 2020 to meet its goals, services should reach the underserved sectors that exist in all populations, such as ethnic minorities, women, disabled persons and very old people. WHO, ILO and UNESCO are preparing new guidelines for community-based rehabilitation that address the rights and needs of people with disabilities, including those who are irreversibly blind. Efforts must be made to strengthen and promote advocacy about VISION 2020 among decision-makers, to design information, education and communication materials and campaigns and to expand community participation. If uptake is to be increased, awareness about eye diseases and their prevention and treatment must be stimulated by locally appropriate information and dissemination strategies. Inciting the community to take responsibility for its own eye health is one way of ensuring effective, sustainable services.

This section presents an updated approach for implementing the established activity areas, or ‘pillars’, of VISION 2020, which are disease control, human resource development, and infrastructure and technology. 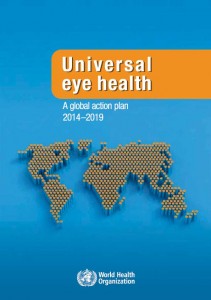 The global eye health action plan 2014–2019 aims to reduce avoidable visual impairment as a global public health problem and to secure access to rehabilitation services for the visually impaired. This should be achieved by expanding current efforts by Member States, the WHO Secretariat and international partners, improved coordination, efficient monitoring, focusing the use of resources towards the most cost-effective interventions, and developing innovative approaches to prevent and cure eye diseases.

Following the request of Member States at the Sixty-fifth World Health Assembly in 2011, the Secretariat, in close consultation with Member States and international partners, developed a draft action plan for the prevention of avoidable visual impairment for the period 2014–2019. The content and structure of the action plan was built on experiences in prevention of avoidable visual impairment gained through major international partnerships and alliances along with lessons learnt in implementing comprehensive eye health interventions at district and national levels. A major effort was made in engaging all stakeholders in the development of the action plan and stimulating their feedback on the draft through web-based consultations and consultative meetings convened by the Secretariat. The Sixty-sixth World Health Assembly endorsed the action plan by adopting resolution WHA66.4 entitled towards universal eye health: a global action plan 2014–2019. 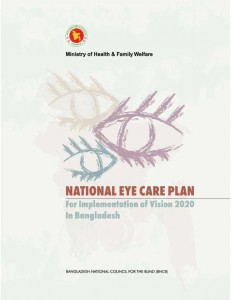 Bangladesh is a developing country with an area of 147,570 sq. kilometers. The estimated population in 2001 was 123.1 million with an annual growth rate of 1.47% (Statistical Pocketbook 2002, BBS); and 77% of the population live in rural areas. Per capita Gross National Income (GNI) in the year 2002 was US$ 380, and 36% of the population lived below the poverty line (World Bank, World Development Report 2004; World Development Indicators). Agriculture sector provides employment to 63% of the country’s workforce. The literacy rate among adults (15+ years) is 51% (BBS Statistical year Book 2002).

The health status of the people has been steadily improving as evidenced from various indicators. The Life Expectancy at birth was estimated to be 61.71 years in January 2004 (CIA World Fact book). The estimated under-five mortality rate in 2002 was 73 per 1000 live births (Unicef website). The government is a major provider of health care in the country along with NGO and private providers. Health care in government facilities are provided free of cost. The per capita annual government expenditure on health and family planning was about US$ 3 while the overall health expenditure per capita was US$ 12 as estimated in 2001 (World Bank, World Development Indicators 2004). 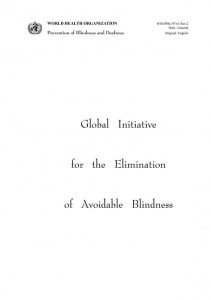 Blindness has profound human and socioeconomic consequences in all societies. The costs of lost productivity, and rehabilitation and education of the blind, constitute a significant economic burden, particularly in many developing countries. Furthermore, blindness is often associated with lower life expectancy in such settings; thus, the prevention and cure of blindness can provide enormous savings and facilitate societal developments.

In its World Development Report in 1993, the World Bank developed the concept of ‘Disability-Adjusted Life Years’ (DALYs), which is a composite measure of the time lived with a disability, together with the time lost due to premature mortality. The ‘DALY’ measure allows for a comparative assessment of health care interventions in terms of cost per DALY saved. Although this measure is not perfect, and sometimes criticized, it is increasingly used as a tool for comparative assessment of cost-utility.

Cataract is by far the major cause of easily curable blindness worldwide. As there are no known effective means of preventing the most common forms of cataract, all efforts have to be made to provide surgery to all those in need. Cataract surgery can be one of the most cost-effective of all health interventions, with a cost per DALY saved in the order of US$ 20-40. In fact, good quality, high-volume cataract surgery can be provided at less than US$ 10 per DALY in some settings. Cataract interventions are thus as cost-effective as immunization and can have a very significant and rapid impact in reducing the burden of avoidable blindness in a population.